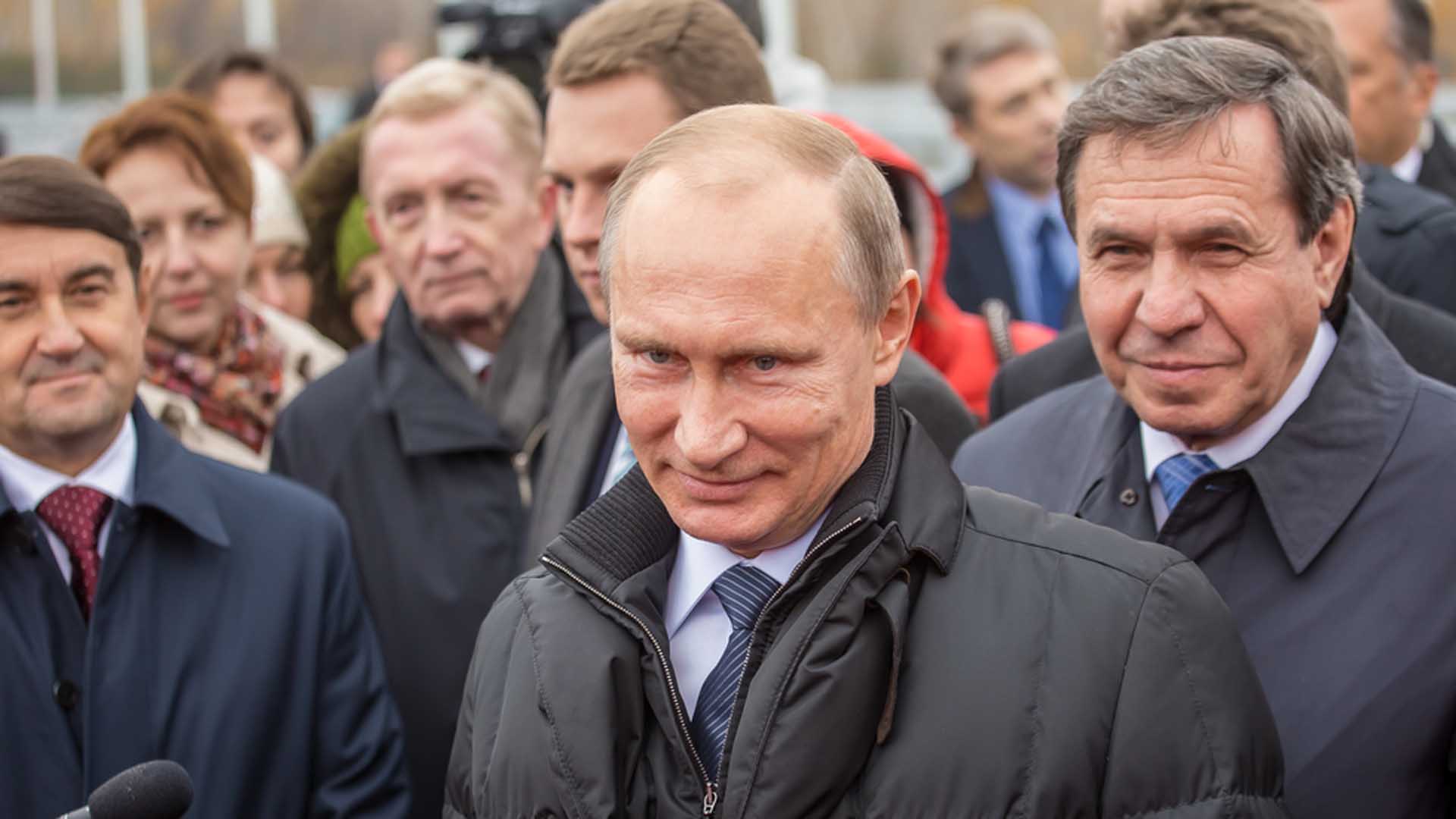 Personality cult Putin is a tough-as-nails, wise, prudent and conservative leader and visionary, a proven KGB-Spymaster, ladies’ man, and military commander, kind of like George Washington and Andropow thrown into a blender.

The real Putin has practically nothing in common with the personality cult Putin, because the latter is simply a fantasy figure, a fictional narcissistic alter ego. The real Putin is a short, bald bureaucrat who has only mastered the art of political intrigue and filling his pockets.

He has never fought in a war or carried out dangerous intelligence missions in enemy territory. Like 99% of Western politicians, he is absolutely nothing special. It is amazing how the simplest techniques of the cult of personality still work. Putin can dive? My eight year old daughter just did that. Putin can do judo? My daughter does Krav Maga. Hunting? My daughter is no fan of hunting but my son will pull the trigger and love it. Horse riding? I think my daughter will start that next.

There is simply no convincing proof that he is in any way especially robust and manly. He was a meaningless spook and a dry bureaucrat all his life who now spends an extreme amount of time with swimming and massages. His marriage to Ludmilla was a failure, he was very strange in his dealings with other people from the very beginning and there is almost complete silence in the media about other women’s stories. [1] He wants to create rumors about himself and attractive female athletes, but there is absolutely nothing confirmed about his sexuality and private life.

Rumours from secret service circles still exist about Putin’s alleged homosexuality and even paedophilia, but these rumours are just as unprovable as the claims about a strapping heterosexuality.[3] In the end the macho cowboy status is nothing but a hollow facade and the private life of the real Putin is a big question mark. Where it really matters, namely the leadership of a country, things do not look any better. His rivals were way ahead of him, with years of diplomatic service in the international arena and membership of the highest Soviet levels. Apart from a very brief guest appearance in the chief armchair of the domestic intelligence service FSB, which was only supposed to improve his poor resume mainly for the benefit of his political career, Putin’s career as a secret service officer has been nothing special at all. This short time span offered at most the possibility of staging oneself and removing embarrassment from one’s own files in the archives, but nothing more.

He returned to Leningrad in 1990 and became assistant to the rector for international issues at the university there. This is not even remotely equivalent to proper training and solid experience in diplomacy. After the fall of the Berlin Wall, people in Russia were able to buy careers and positions. A year later Putin became the assistant of Anatoly Sobchak and “distributed export licenses”, which practically meant that national wealth was sold off abroad and crooked insiders stuffed their pockets. This, too, did not correspond to real training in politics and business. In August 1996 Putin became deputy head of the Kremlin property administration, which once again meant the distribution of assets to loyal ex-Soviets. He still did not know how a healthy economy works and how a company generates solid profits. His teacher for the world of politics was Boris Yeltsin of all people, a crooked transitional figure in the transformation phase of communist Russia into an oligarchy with a national conservative touch. Putin did as he was told, and so in May 1998 he was allowed to become deputy head of the presidential administration. A year earlier Putin had just been quickly declared a doctor of economics by a St. Petersburg university. The American economist Clifford Gaddy and others considered the doctoral thesis a brazen plagiarism, pieced together from foreign texts.[4] Nothing suggests that he understands economics, and no matter how much he blames foreign powers, he bears joint responsibility for the downfall of the Russian economy.

Actually, the much more qualified Yevgeny Primakov, who had considerable experience as a diplomat, secret service chief, foreign minister and prime minister, wanted to inherit the office from the burnt-out president Yeltsin, but Yeltsin wanted someone weak and unexperienced. Putin also seemed less burdened abroad than Soviet price horse Primakov. Putins family was almost wiped out during WWII and here lies the cause for his bitterness and rage.

The almost 900 days of siege of Leningrad by the German Wehrmacht was one of the most brutal sieges ever in history. It is estimated that over one million civilians died of starvation or other consequences in the city. The German Air Force targeted the Badayev warehouses, where most of Leningrad’s food supplies were stored. Where were Vladimir Putin’s parents, Maria and Vladimir Senior at the time? As a soldier, Vladimir Sr. had barely survived the fight against the Germans with two crippled legs and chronic pain. At the end of the siege of Leningrad, Mary barely had the strength to walk; the common son had perished in a children’s home. It is said that Vladimir Vladimirovich Putin was born to these two parents in 1952, although the final confirmation is missing and he could just as well have been adopted.[5] How must it have been to grow up in this family and the destroyed, traumatized Leningrad? In an article for the publication of Russky Pioner, Putin claims that his father had become a member of the Communist Party and was assigned to a sabotage unit of the NKWD secret police.[6] Allegedly he waited under water for hours and breathed through a straw, because the Germans had almost completely wiped out his unit. A traitor was to blame for this fiasco and there are persistent rumours that Putin Sr. was a traitor.[7] The first son died of malnutrition and diphtheria, although it was only years later that it was possible to find out where he was buried. The mother is said to have been taken away together with the dead and discovered by the father at the last moment and brought back to the apartment. Almost all of Vladimir Sr.’s brothers died in the war. Even if he himself did not experience the war, the horror must have had clear consequences for his parents. Under such conditions, emotions die and it becomes virtually impossible to have a normal emotional bond with the child.

From the very beginning, young Vladimir showed problematic personality traits such as extreme irritability and outbreaks of violence. In between he was awkward and rigid, he is said to have beaten his wife regularly later during his time in Dresden. He got fat, frustrated and depressed. As president, he later celebrated a pathological, narcissistic self-expression, while the cruelty of the wars under his command and the destruction of rivals betray antisocial traits. He is considered obsessed with control and extremely paranoid and hates to be criticized  in the media, in the population and in the higher levels of power. Even old companions and confidants feel his hatred. All this is strikingly reminiscent of Stalin, who proved to be extremely devastating for the Russian people and for people from other nations.

As far as money and influence are concerned, he has long since become a tsar and his closest confidants are the princes. They live in palaces, fly in luxurious private planes and wear watches that cost up to half a million dollars.[8] When the time comes, the official titles will probably be awarded with the blessing of the Russian Orthodox Church. After the Second World War a young Putin enjoyed certain privileges, such as a wristwatch and later even a car. Nevertheless, the housing situation was poor and the consequences of the German siege remained visible everywhere. Amid the drunken thugs in the neighborhood, the young Vladimir Putin appropriated his eat-or-die mentality, which marked the rest of his life. What was the desire for revenge in Putin’s budget? What was one’s attitude towards the Germans? You can imagine it. Towards the end of the war, the Red Army rolled over one country after another and occupied large parts of Germany, expelled millions of people, took revenge and occupied land for the next decades. The young Vladimir’s history lessons were strictly anti-German, the cultural commemoration was anti-German and even the children’s television programs and the entertainment novels were anti-German. “Shield and Sword” became a bestselling book and movie series: A Soviet super agent on mission in Germany, a very elaborate, dramatic production with all the classical characteristics of the state-regulated style of “socialist realism”.[9] Despite his mediocre grades, he managed to get a place at the Leningrad University, probably because of his mentality and his father’s contacts. One could not start an apprenticeship directly with the KGB, but first had to complete a degree and wait to be examined and conspiratorily recruited. Putin told his biographer that for four years no one from the KGB came up to him, which is perhaps a lie, or was due to the fact that, as a well-known and easily irritable thug, he was not too interesting a candidate for the secret service.

Agents deployed abroad must be able to control themselves to the utmost and maintain their camouflage under the most adverse circumstances. Putin, however, acted negligently and unprofessionally from the very first moment, as he bragged to a musician about his activity with the KGB. He was also clumsy and rigid when dealing with women, which severely restricted his usefulness. A Soviet defector from Russia claimed that Putin had worked for a while in the Fifth Directorate and thus fought dissidents in his own country. Later, he worked in Leningrad’s counter-intelligence division, which meant they were on the lookout for enemy snitches of which there were virtually none in Leningrad. This provincial dead end job was miles away from the glorious missions behind enemy German lines from the film “Shield and Sword”. It’s like applying for the military special forces in the expectation of fulfilling cinematic missions in the style of Rambo, but in the end you only land in the wilderness as a normal non-commissioned officer and carry ammunition crates. The KGB had hired far too many personnel out of sheer paranoia and whole hordes of agents were bored and earned neither much money nor many laurels. After years of this mess, Putin was allowed to undergo additional training and evaluation in Moscow, although his trainers reported serious shortcomings, including a low awareness of dangers and a lack of communication skills. He was not detached for an action-packed deployment abroad in West Germany, but was only allowed to work on files in a building complex in Dresden. He drank beer, gained weight, became apparently depressed and fought with his wife.

History is full of dictators who didn’t have any special abilities and messed things up. Rule number one in the Despot’s Manual is: Act like a king and you’ll be treated like one. People only follow supposed supermen. Either you are a (false) God or nothing.