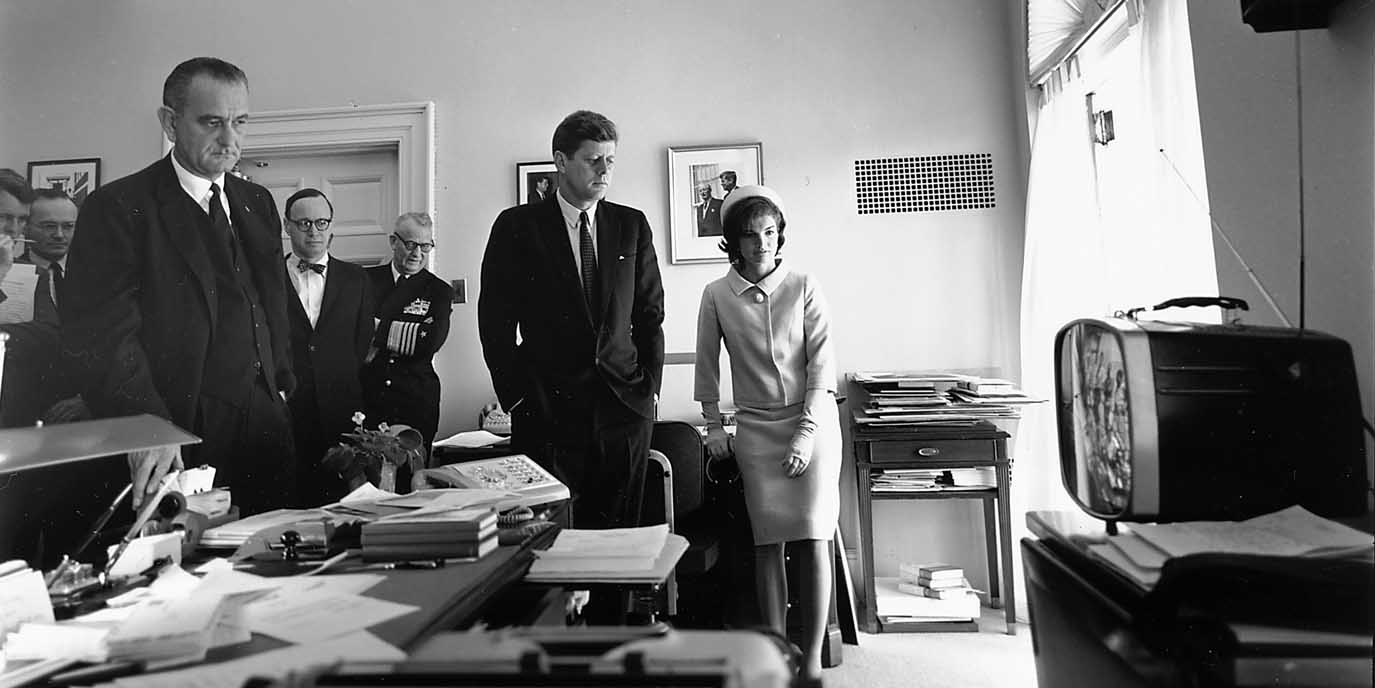 Yes, there most likely was indeed a coverup of the circumstances surrounding JFKs death. But president Kennedy didn’t really war with the American establishment, he didn’t really condemn secrecy and black ops and he surely didn’t mess with the Federal Reserve. The left and classic conspiracy circles have been fed a variety of myths, fakes and misleading information to paint JFK as a hero who died on the frontline against the Deep State. He got along fine with his mafia daddy, his cabinet full of well-connected officials and often times even with the CIA unless the agency failed and caused embarrassment.

it made no sense for any country to kill him because the benefits were small and the risk of fallout too great. Cuba wouldn’t really have dared and wouldn’t have survived it. The Soviet Union couldn’t predict the actions of Kennedy’s successor and the Soviets were already too close to Oswald. It made no sense to do it and especially not with Oswald. Maybe the mafia activities of the Kennedys left some other criminals angry and bent on revenge. In that case the US government would have covered up the details of the assassination after the fact to avoid ambarrassment.

Kennedy was born into wealthy circles and struggled with health issues from an early age, but this did not stop him from earning the reputation of a playboy. In December 1937 his father Joseph became U.S. Ambassador to the United Kingdom, which most likely required a secret service background and membership in a secret society. Officially, he is said to have been rejected as a Catholic Irishman by all major American clubs, but only extremely trustworthy individuals are used as diplomats for Britain. Rather, it is documented by numerous sources that Joseph Kennedy entered into alcohol smuggling with the help of the Mafia very early at the beginning of prohibition. He used the profits on the stock exchange to become a millionaire. In addition to his close relationship with Chamberlain, Kennedy very quickly formed a close friendship with Nancy Witcher Langhorne Astor, a British member of the House of Commons of US descent who led an arch-conservative circle on her luxurious country estate known as the Cliveden Set, which included Oswald Mosley, founder and leader of the British Fascist Party (BUF).

The cabinet of horrors

When his son John F. Kennedy became president, his team in the White House West Wing comprised almost exclusively people who had worked for him before. He left it to his brother-in-law Sargent Shriver to pre-select the candidates for the positions. Shriver had studied at Yale University and was a member of secret societies there.

No dove of peace

Kennedy often spoke of peace, but carried out the largest peacetime armament the U.S. had ever seen. Kennedy initially strengthened the military engagement of the USA in Vietnam by increasing military aid for South Vietnam and by increasing the number of US soldiers sent to South Vietnam as “military advisors” from 700 to over 16,000. He also ordered helicopters, armoured vehicles, combat bombers and artillery to Vietnam and agreed to the use of napalm and defoliants at the end of 1961. He also encouraged the formation of an elite unit to fight the Vietcong, the United States Army Special Forces Command (Airborne), nicknamed “Green Berets” for its headgear.

Whether Kennedy would actually have avoided the escalation of the war and the direct warfare of the US armed forces in Vietnam is a controversial question among historians and former employees of both presidents.

No uprising against the central bank

The Presidential Executive Order 11,110 became a myth: The conspiracy author Jim Marrs (Crossfire: The Plot that Killed Kennedy) claimed that Kennedy was using it to alienate power over money from the central bank. In reality, it was a meaningless order for silver certificates that gave the central bank even more influence. Marrs spread more fakes about JFK and the FED.

He did not have the energy or the partners to rebel against anyone and it would have been possible for the “deep state” at any time to further deteriorate his already bad health; to silently push him out of office or six feet under.

“Had the nation known how sick John F. Kennedy really was, he would never have become president.”

His family always claimed that the back problems were the result of a serious football accident. In fact, Kennedy suffered from back problems, asthma, extreme fatigue and numerous allergies even as a young boy. After one of three serious back surgeries, he fell into a coma and was hovering between life and death for several weeks. He had to wear a support corset and orthopaedic shoes. In addition to painkillers, antibiotics, antidepressants and sleeping pills, he took up to five hot baths a day to relieve his suffering. When travelling he often took a collapsible rocking chair with him. He used extra hard special mattresses or slept on the floor in hotels.

More serious than his back problem was his irritable bowel, Dallek emphasizes. Even as a boy Kennedy suffered from diarrhoea, tiredness and mysterious breakdowns. He was later diagnosed with Addison’s disease, a problem with the adrenal cortex. The drug cortisone attacked his body, attacked his bones and probably led to osteoporosis – which further aggravated his back problems. Kennedy consulted eight doctors at a time, including Max Jacobson (“Dr. Feelgood”), a German-born doctor who prescribed him a mixture of amphetamines and sheep placenta. To the outside, Kennedy ironically preserved the image of a sporting ace.

The Warren Report left many contemporaries unsatisfied. It also soon became known that the Commission had not pursued evidence pointing to more than one perpetrator. At no time had members of the commission questioned the FBI’s findings, neither photographs nor X-rays taken during the autopsy had been available to them. In fact, President Johnson had instructed commissioners not to investigate any evidence of involvement by Cuba or other states. The President feared that the speculation that Cuba or the Soviet Union were behind the assassination might exacerbate the danger of a Third World War.

Although Johnson publicly praised the report after publication, he doubted its conclusions in background talks. Today the view prevails that the Commission did not carry out an unbiased and open-ended investigation of the case. The Commission did not consider the possibility that there were other perpetrators or that Oswald might be innocent.

The Church Committee of the US Senate investigated illegal intelligence gathering by the CIA and FBI following the Watergate scandal in 1975, and also took into account their conduct in the Kennedy assassination. It concluded that the FBI, the primary investigative agency for the Kennedy assassination, was urged by Director Hoover and unnamed “senior government officials” to rush the investigation. The Church report pointed out that high-ranking members of both authorities may have deliberately not disclosed potentially important information.

Because conspiracy hypotheses about the Kennedy brother and Martin Luther King murders continued to circulate, a House Select Committee on Assassinations (HSCA), a parliamentary investigative committee of the House of Representatives, was appointed in 1976. After three years of work, it produced a report in 1979 that essentially confirmed the findings of the Warren Commission, but criticized the FBI’s investigations as seriously flawed. Although the FBI had adequately investigated Oswald’s past life and perpetration, it had not properly pursued the possibility of a conspiracy. The report cited the lack of cooperation of the secret services as the cause of these errors, as well as “time pressure and the desire of the national leaders to appease public fears that there had been a conspiracy”.

The committee confirmed the single bullet theory that Oswald shot at Kennedy multiple times and killed him with the third shot. But it said it was highly likely that there was another unidentified shooter who fired a fourth shot from the grass mound at Dealey Plaza but missed. Behind the Kennedy assassination was thus a “conspiracy”. The committee members could not, however, state who was involved. On the basis of the evidence available to them, they came to the conclusion that neither the Soviet nor the Cuban government nor the FBI were involved in the murder. An involvement of the American Mafia or of anti-Castro- Cubans in exile could not be ruled out.

At Dealey Plaza, several hundred people witnessed the assassination. Many of them gave statements, which do not fit the representation of the Warren Commission. Fifty witnesses testified that they heard shots fired from the front, from the grass hill at Dealey Plaza. Several eyewitnesses said they saw gun smoke rising on the grassy knole or at the underpass, and men with guns running away.