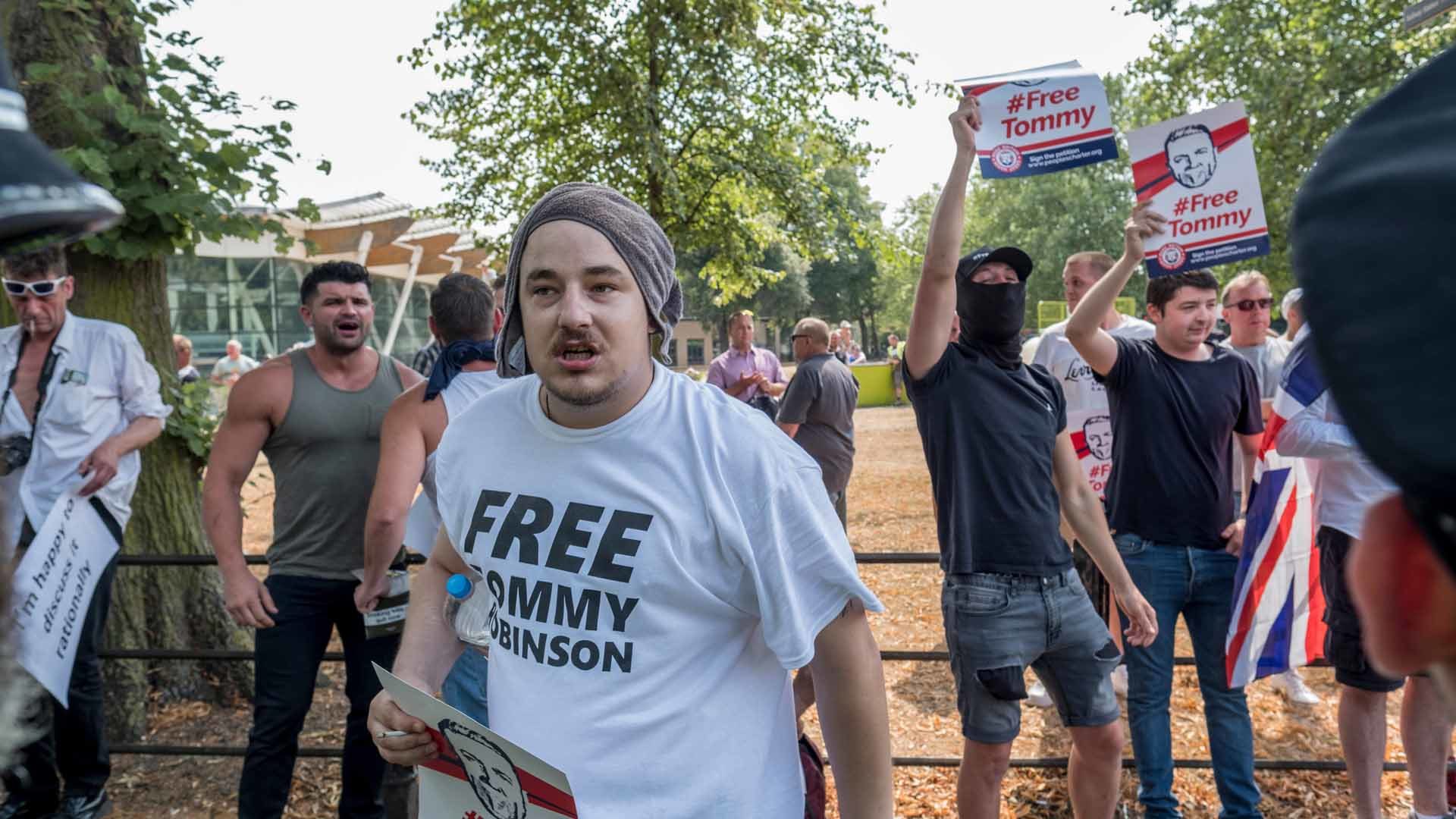 Conservatives are happy for all the help they can get against mind numbing leftist ideological crazyness. But certain kinds of help are so tainted that they create more harm then useful results.

Conservatives needed fresh ideas and faces who command respect and attract a broad spectrum of the population, but what they got was a badly aged showbiz and real estate mogul called Trump and the fad we call the “alt.right” or “new right”.

Nothing about it was really new or alternative. Hating muslims and obsessing over muslim extremism? We had that for almost the entire Bush administration. Hating the left and obsessing over communist subversion? We had that all cold war long. The idea of a pure white ethno-state and absolutist white rule? That sounds like old-school colonial style British psychopathy. The idea that the Russian regime will come to the rescue, be a global leader and role model? Sounds like what Western communists believed until the Soviet Union collapsed.

Classic conspiracy media like the book by Gary Allen at least offered some new insight in the past: Rich families can afford to buy off the entire political sphere and the media to keep the population riled up and busy tearing each other apart. And that basic principal is unfortunately very real but fortunately easy to understand.

While the alt.right obsesses over the mogul George Soros who is handing out money to leftists like candy, but does not make decisions, the alt.right gets very uncomfortable when people ask about the billionaire donors of the righwing sector such as the Mercer family, the Shillmans or the Rosenwalds. 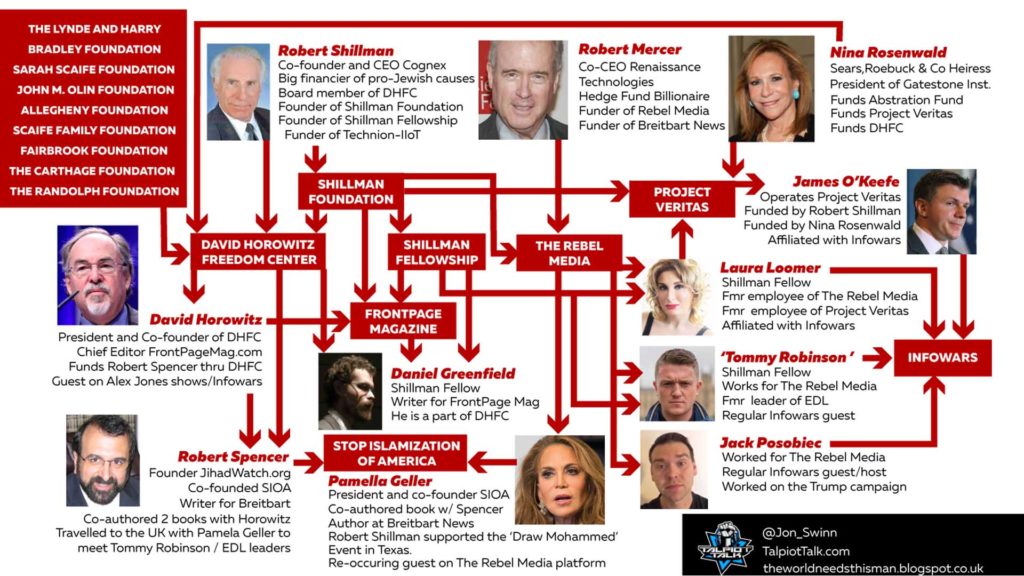 Some conspiracy buffs trace these connections and obsess over the fact that these billionaires are jewish and well connected, elitist Zionists, not your average jew who’s just happy that Israel exists and can protect itself. Ususally conspiracy buffs believe the myth that a tiny little jewish banking family called Rothschild managed to steal the British empire unmolested, when in reality the high nobility like Hessen-Kassel built the Rothschilds slowly and methodically as puppets to draw attention away from the Royal families. The people were supposed to believe the fairy tale that 5 little brothers, whose father had to live in a Frankfurt ghetto, could become hotshot leaders of the banking world or even the new quasi-kings of a new capitalist world order. European kings as far back as the 1300s and 1400s used jewish middlemen to divert the population’s anger, envy and mistrust.

It’s not just jewish billionaires who pump money into the alt.right and it’s not just a simple ploy to get rightwingers away from antisemitism and towards islamophobia.

The shadowy club “Council for National Policy” is a network where rich and influential folks find rightwing groups to put money into them. The spectrum ranges from mainline Republican groups to shock jocks like David Duke and even the early conspiracy media of the John Birch Society. Not every CNP member is automatically and consciously part of a conspiracy. It can be assumed that many bona fide members are simply watched and indirectly steered. Steve Bannon is just one of several members who overlap(ed) with the Trump administration and scarce sources tell us that the council was instrumental in selling Trump to conservatives even though Trump didn’t have any conservative credentials, just tweets.

Breitbart may have fallen out of favor and Bannon might be out of the White House, but the elitist circles have enough money to keep Trumpism and the alt.right going. Stars like Milo can be built up and when they fall, new stars can be created very quickly or adapted.

Which brings me to Infowars and Alex Jones. Back when Infowars did a solid job dismantling the lies of the Bush administration and faux conservatism, some conspiracy buffs were disappointed that Jones didn’t obsess over jews and followed that up with the standard, knee-jerk accusation that Jones must be in league with the blood drenching jew zionist conspiracy, but no real evidence. Jones’ ex wife has some jewish in her family? That’s incredibly boring. Some jewish employees? Please.

Nowadays Infowars has morphed into a hybrid, retaining some classic conspiracy credentials but largely adopting the pillars of alt.right ideology. You look at Infowars these days and you would hardly know it’s the website of the supposed leading conspiracy theorist of America. All you’ll find is Trump advertisements, excuses for Trump, fairy tales about Trump and great expectations for Trump, hatred for the opponents of Trump, unfair generalized stereotypes about Muslims and of course FEAR OF COMMUNIST SUBVERSION EVERYWHERE. Jones used to educate people about the left-right paradigm. Now he’s doing exactly what he knows to be false and misleading. Anything against the left is now classified as “good”. Even internment camps.

And Jones has been heavily promoting folks like Posobiec, Tommy Robinson and Laura Loomer who are or were connected to the aforementioned elite Zionist billionaire donors. Jones even contemplated hiring them. Needless to say a number of classic conspiracy buffs were not amused.

Forget the fairy tales about the Rothschilds stealing the British empire unmolested. Here we have a troublesome network and some very rich guys who are part of the powerful Neocon nexus. Did I mention that Jones now sort of promotes FOX News which belongs to billionaire Rupert Murdoch? When Trump first announced his presidential run, Infowars laughed at this flashy New York mogul who had no conservative credentials whatsoever. Further along in the campaign Infowars wasn’t laughing anymore but worried that Trump might run outside of the Republican party, split the conservative vote and hand the victory to Hillary Clinton. Then the real change happened: Infowars started to promote Trump as the real deal, the savior of Americana, the shining knight against the leftist deep state conspiracy who had the blessing of god and the holy ghost. No credible facts were provided to prove this fairy tale and nobody really expected Trump to win. The idea was apparently to jump on to a hype train, see Trump lose against Hillary with his head held high, and then start a brutal conservative media hype that would last throughout  Hillarys presidency. Hyping up the fear would bring in lots of revenue to Infowars and a possible Trump TV network.

New expensive offices had been built by Alex Jones, people were hired, equipment bought. Could they take a financial hit? Could they survive Breitbart and stealing their thunder? Could they stand their ground during  the onslaught of optimistic idiocy and Pepe-memes on social media? Could they afford going against the trend and tell the Trump voters it’s all a sham? I doubt it. A Buzzfeed story quoted some ex-exployees of Infowars anonymously with claims that Jones was horrified at Trumps victory and worried about the future of his company. Infowars became Trump cheerleaders, sort of a FOX News for a section of the population that mistrusted FOX during the Bush administration. And then Roger Stone came along who is now entangled in the Mueller investigation and once wrote to Jerome Corsi

This probably referred to Rebekah Mercer from the influential donor family. Infowars hawkes its health supplements and appears to generate decent revenue with them. But is it enough? Especially if he loses the lawsuits against the Sandy Hook parents. A judge ruled recently that Infowars must hand out its commercial and marketing information. Soon maybe Jones and his employees will have to make depositions. And it starting to sounds a bit like the Mueller investigation. How long until an employee rolls over and admits something crazy?

But Jones has flipped on so many topics it’s very concerning: The Russian regime, Trump, FOX, an Iran war, internment camps, the left-right-paradigm etc. If you want insight today, Infowars is one of the last places you should look. It’s generic, boring and predictable. If something can be spun into a victory for Trum, spun it will be. If something makes look Trump like a complete puppet and incompetent, there will be some conspiracy theory concocted to paint him as a warrior for the American people.

In 2013 I filmed Alex Jones at the Bilderberg conference in the UK saying he wants to quasi-retire and be off the air by 2018. He’s been busy building up new “talent” like Owen Shroyer and he contemplated hiring creeps like Tommy Robinson. If Infowars gets pounded during the Sandy Hook trials and loses 20 million $ Jones can’t retire unless he gets bailed out by his fans or some large donors. If he survives financially he can maybe retire and have his puppets dance in front of the camera for him.