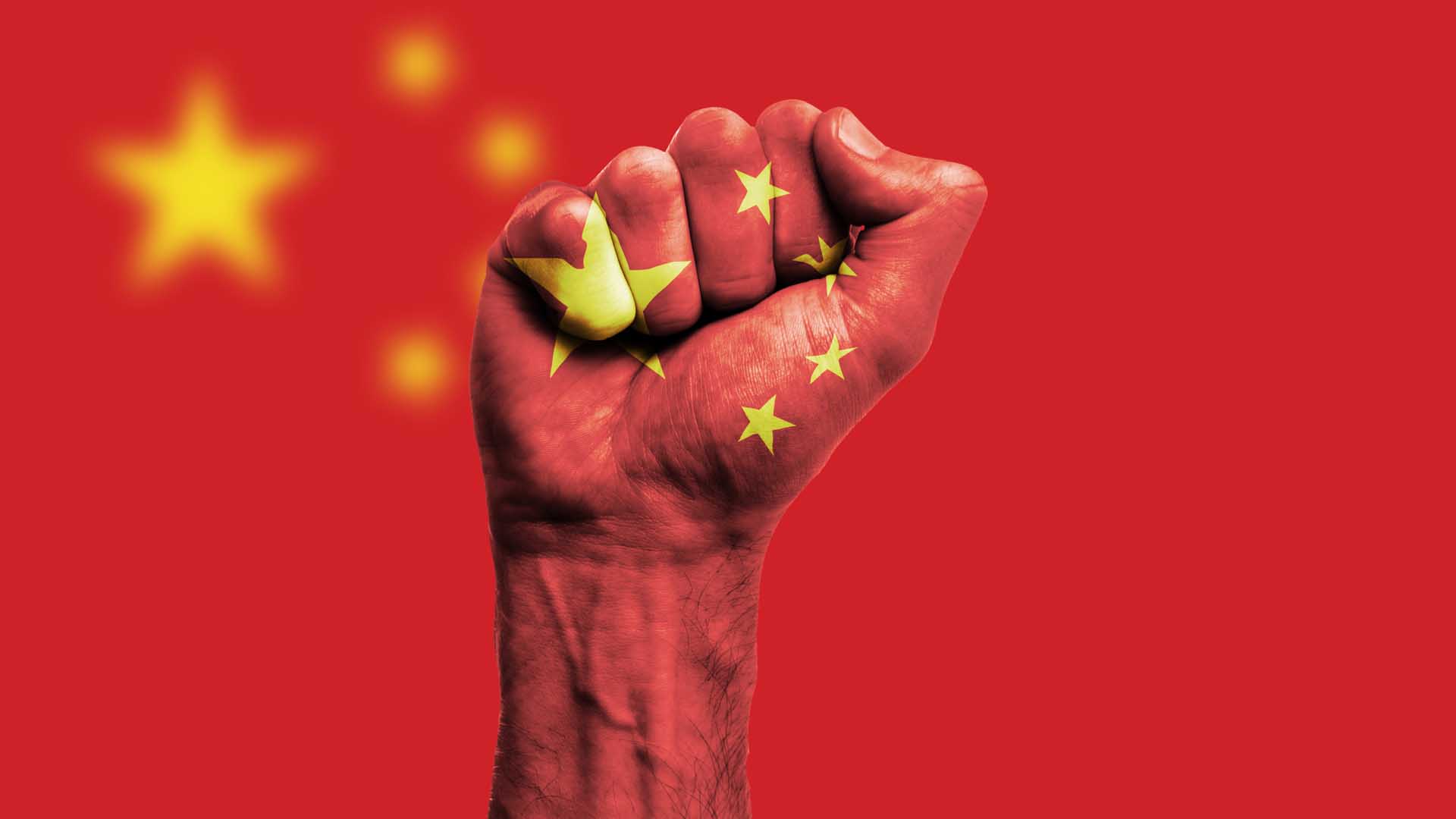 The idea that Mao and his comrades could carry out a revolution on their own account and then rule China is completely absurd. It is unbelievably bold that historians spread this fairy tale instead of finally profoundly exploring the role played by the Anglo-American, French and Soviet secret services.

Mao and the Communists were highly dependent on the supplies, advisers and training facilities of the Soviet Union. From the very beginning, the Soviet Union had controlled the ideological, organizational and secret service foundations of the international socialist movement. Historians know how aggressively Soviet services recruited people and organizations, and of course Moscow did not want to leave it to chance in which direction China was moving.

The Chinese nationalists led by Chiang Kai-shek, on the other hand, were mainly dependent on the Anglo-Americans and relied on them for essential supplies and military strategies. Chiang Kai-shek had defeated a whole line of warlords and forced the Communists to flee on the “long march” to the mountains, where they established their main base and had the Russians behind them. To organize, train, feed and equip 900,000 communist guerrilla troops, skills and production capacities were needed that the Russians provided in exchange for money, control and the territory of Manchuria. The occupation of Manchuria by the Russian army was approved by US President Roosevelt.

US General Stilwell had the US president behind him and a high degree of control over the armed forces of the Chinese nationalists. The USA was unrivalled in production and technology and was able to supply more than enough material. Under these conditions, America and the Chinese nationalists should have prevailed, but in the end the Communists won. In the USA there was a heated debate afterwards about who was responsible for the failure (“Who lost China?”) and some pointed the finger at the highest levels of America. Politicians provided stupid excuses and sideshows, which of course gave the impression that they really had something to decide. The US government supposedly tried with the best of intentions to unite both sides in China, the nationalists were too hesitant, the Chinese nationalists were too unorganized and corrupt, they believed Mao’s democratic propaganda, and so on.

The American 5-star general and Freemason George C. Marshall had virtually ordered Chiang Kai-shek not to hunt down and destroy the Communists any longer; at a time when the Communists were weak and could have been defeated. The Americans were well aware of how the communist revolution had played out in Russia and what horrors followed.

Mao got his breather, was able to reorganize his troops, find new recruits and integrate hundreds of important Soviet advisors, many of whom probably also had a spy mission. Mao was no more essential to this undertaking than other prominent Chinese Communist functionaries. If Mao had insisted that China’s Communists remain free from infiltration by Soviet Russian agents, the Russians would have simply eliminated Mao and replaced him with another, more obedient person.

The Russians created 16 training facilities for Chinese troops and some Chinese officers went to the Soviet Union for their training, probably under the obligation of the Soviet secret service. There was a massive Russian production in Manchuria of cartridges and artillery shells for the Chinese Communists.

The nationalists had to fight battles with huge losses and deal with internal problems such as mismanagement, organisational shortcomings and poor pay. The middle class of the population was increasingly taxed, inflation and corruption were rampant, to which the Americans withdrew more and more support. For manageable sums of money, the Americans could at least have saved southern China from the Communists. After the Second World War, Europe had the Marshall Plan with large investments and there was also a lot of money for Greece and Turkey to curb communism. But with China, the Americans were suddenly stingy? It seems that the leaders of the United States and the Soviet Union negotiated the matter at the highest level.

Chiang kai-Shek finally resigned. The Americans not only had a significant degree of control over the military decisions of the nationalist army, but had also trained fighters.

Two million landowners were cruelly murdered by the Communists on their march to power. Then came the great terror in which, according to fixed quotas, alleged dissidents and traitors among the people were arrested and killed. During their training in the Soviet Union, Mao’s top officials had learned how to organize such mass murder, spread mass propaganda, work with psychological warfare, ensure that as many citizens as possible were involved in the cleanup operations and how to pull up a spy network. Only in the economic sector was there a serious incompetence. The Soviets made serious mistakes in the first decades of their rule in Russia and one would expect better strategies to be communicated to the Chinese Communists at this point, but nothing like this was discernible. Stalin’s forced collectivization and purges were not only due to his paranoid and psychopathic personality, but also pursued the tough tactic of destroying a certain percentage of the population. When several tens of millions of people died of starvation under Mao, this could also have been a planned action, because the scarce food was distributed according to how faithful and subservient a citizen was classified. Much of the Chinese rice was exported to the Soviet Union, while Soviet agricultural products were sold to the West for hard currency and technology. Mao’s regime had especially intellectuals eliminated and entrepreneurs, whereupon the once lively cities of China became depressing places.

When the Americans defeated Japan in World War II, China was celebrating. The transport of the beaten Japanese troops from China was organized by US General Albert Wedemeyer (trained at WestPoint and Fort Leavenworth), who was regarded as a strong anti-Communist and had been involved in the invasion of Normandy. In 1941 he designed the “Victory Program” for the annihilation of the German armed forces in Europe. So he was a professional with an anti-Communist attitude. In fact, one could have expected officers of his calibre to be able to beat the Communists in China. In 1943, Wedemeyer became Chief of Staff under Louis Mountbatten, who commanded the Allied forces in Southeast Asia and was named “Supreme Allied Commander of the South East Asia Command”. Due to the improper marriage of one of his ancestors, Mountbatten did not use his real name Hessen-Darmstadt, but was nevertheless closely related to the British royal family.

General Wedemeyer succeeded General Joseph Stilwell as Chief of Staff to Chiang Kai-shek and Commander of the Southeast Asian Armed Forces in the Republic of China. Normally, the command is handed over in an orderly manner with detailed instructions. But Stilwell had just left and had left Wedemeyer almost nothing. The staff shrugged their shoulders and said that Stilwell had always kept everything important “in his trouser pocket”.

On December 7, 1945, Wedemeyer met with General Douglas MacArthur and the Navy Admiral Raymond A. Spruance and had plans to threaten the Communists with moving many more nationalist troops north and even to Manchuria. This was intended to encourage the Communists to seek a joint solution with the Nationalists. Stilwell pleaded for lend lease policy funds to be distributed among the nationalists and communists so that the Japanese could be better combated. Chiang Kai-shek was appalled. Stilwell either had a disparaging opinion of the British and the British military leadership in Asia, or he just played that disparaging attitude. He sneered at the old-fashioned “Limeys” (British who drank their tea with lemon) with their British accent and against the old British empire. These animosities were later used as one of many excuses to explain the defeat. Three divisions of nationalists equipped by the USA defected to the Communists; reportedly without the espionage of the Americans and nationalists having gotten wind of it before. One division consists of about 20,000 soldiers. That one could overlook the fact that three divisions planned to take off with the equipment is absurd. It may well be that the British and American leaders had allowed the defection. US President Truman used it as an excuse to impose an arms embargo and stop supplying the Chinese nationalists. After the complete defeat of the nationalists, General Wedemeyer testified before the US Congress that the nationalists had lost mainly because of the lack of supplies from the USA and because the Western mass media and politicians had no sympathy for the nationalists. The fighting morale of the nationalists had collapsed. If the US military advisers had been deployed further down the hierarchy of nationalist forces, much more would have been possible. Such a strategy had been successfully implemented during the Greek Civil War for example. Vice-Admiral Oscar C. Badger, General Claire Chennault and Brigadier General Francis Brink also stated that the arms embargo was a significant factor for the loss.

“From the point of view of the struggle against communism[&][Stilwell] has done China a great disservice”.

Stilwell had simply implemented his orders from Washington; from General George C. Marshall.

“In 1946, General Marshall used the tactic of withholding ammunition to secretly and quietly disarm the Chinese forces. When we look at General Marshall, we must remember that in the United States the civilian wing has the last word in military matters and that brings us to the then Secretary of War Henry L. Stimson, Marshall’s superior and member of the Order of Skull and Bones (joined in 1888).”