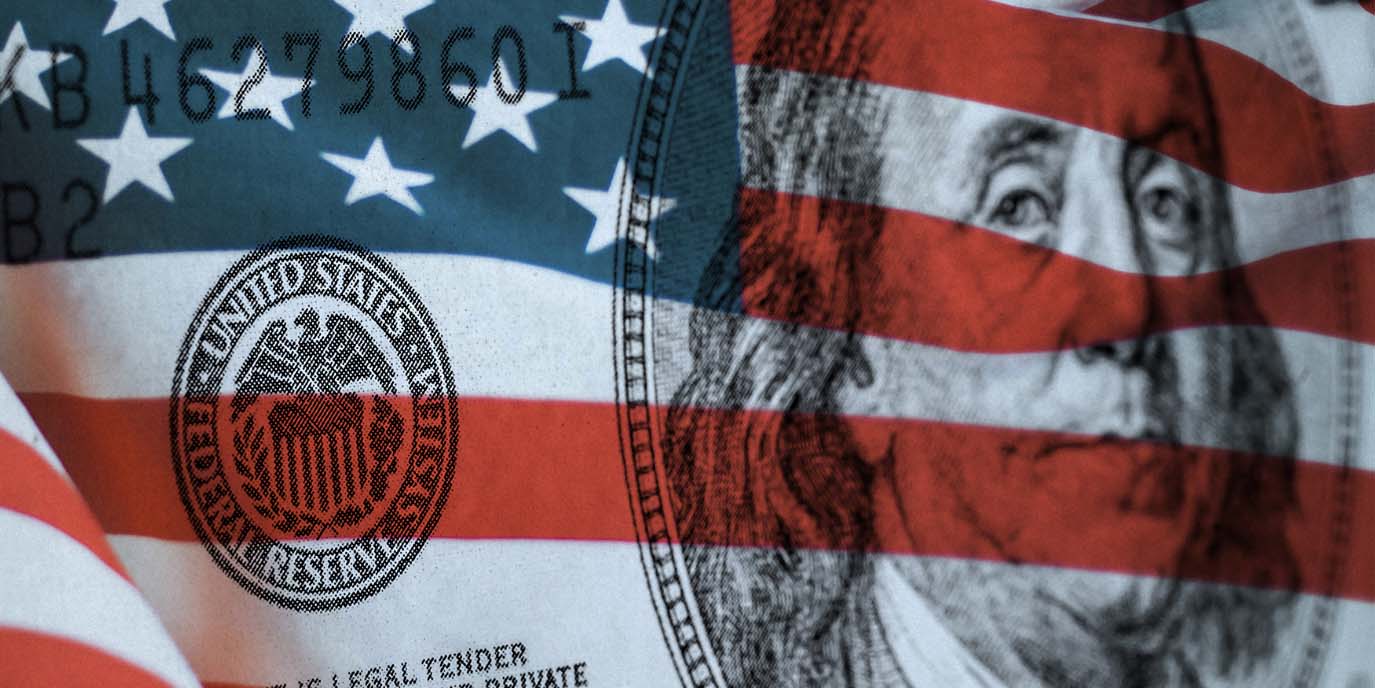 The US Federal Reserve is being restructured by establishment circles and we hear: “Nothing is impossible” to stabilize the economy in the middle of the corona pandemic. Important restructuring is being carried out by private sector insiders such as BlackRock, who are part of the Skull & Bones network. The audience of ordinary conspiracy theorists is being supplied with new stalling slogans and fantasies about salvation.

Should Wall Street conditions deteriorate significantly, the central bank could go where it has never been before, namely into the stock market, where it would “passively take a look” at the performance of stocks, according to market analysts and economists.

So far, the FED is using far-reaching emergency provisions from the original Federal Reserve Act, but would soon have to have new powers approved by Congress. The FED wants to enter the ETF market, which has taken on an enormous size and in which private companies dominate like BlackRock. BlackRock manages assets worth around $7 trillion and is initially expected to earn very little from the deal with the Fed.

In the US, state and large private companies have never really been separate because the American upper class was already closely related to each other. The Federal Reserve is a clever construct made up of elements of government as well as elements of the private sector, where the richest families are related to each other and cover various economic and industrial sectors.

In the ordinary conspiracy literature, the Fed is described as a purely private bank of a Jewish world conspiracy. Abraham Lincoln and JFK are hailed as martyrs in the fight against the jews, although both presidents were loyal insiders and generally did not really mess with the establishment.

The connections between US President Trump and the circles around Skull & Bones and Blackrock are numerous. In the election campaign Donald Trump still railed against Goldman Sachs, George Soros and the entire banking industry. Then he made Steve Mnuchin Secretary of the Treasury, a member of Skull & Bones and a former partner of Goldman Sachs and George Soros with countless other connections to the American moneyed aristocracy.

Trump is friends with billionaire Stephen A. Schwarzman, chairman of the Blackstone Group and temporary leader of Trump’s Strategic and Policy Forum. Schwarzman’s Blackstone Group, as an international financial demonstrator with tentacles in numerous countries, is an ideal vehicle for the operations of Skull & Bones. Schwarzman’s partner in the establishment of Blackstone was Peter George Peterson, a former colleague at the banking house “Lehman Brothers, Kuhn, Loeb Inc.

Trump’s second judge for the Supreme Court was Brett Kavanaugh, a confidant of former President George W. Bush and a probable member of the secret society Skull & Bones.

The current bailouts are a bitter disappointment for those who hoped that Trump would “drain the swamp” and disempower the “Deep State”. Nevertheless, we are seeing new stalling tactics, persistence and even  salvation propaganda from the conspiracy media, whose propaganda for Trump is currently collapsing on all fronts.

Building on classic fakes and misinterpretations from conspiracy literature, Trump is hailed as a martyr in the fight against the Federal Reserve, which is presented as a Jewish conspiracy and purely private bank.

Trump may have nationalized the Fed, the net says. He would thus be seen in the tradition of JFK. The Presidential Executive Order 11,110 became a myth: The conspiracy author Jim Marrs (Crossfire: The Plot that Killed Kennedy) claimed that Kennedy wanted to take away the power over money from the Federal Reserve. In reality, it was a meaningless order for silver certificates, which actually gave the central bank more influence. Marrs spread more fakes about JFK and the FED.

The tiny Rothschild family, according to the fairy tale, had succeeded in taking over the entire British Empire without any significant resistance and soon after this impossible feat was achieved a second time with the US. In reality, the Rothschilds were only accountants and front men for the Guelph nobility and the Anglo-American Empire.

There was never a real source for the repeatedly mentioned Rothschild quote about the control of money and subsequent the state. It is probably a fake, but is still cited in a current Infowars video.

Even a popular Lincoln quote has never been found in the archives of the Times of London, as claimed. According to the fake legend, the Rothschilds wanted to impose usurious interest rates on Lincoln. He refused, and was murdered shortly afterwards. Lincoln was in fact a supporter of a central bank and his supposedly interest-free greenback dollars were anything but interest-free.

The distortions of Eustace Mullins about the FED

One of the first conspiracists about the Federal Reserve was Eustace Mullins, whose book “The Secrets of The Federal Reserve” influenced further generations of conspiracists. In 1949, he came across the eccentric poet Ezra Pound, who was in a closed psychiatric ward and recommended that he search the Library of Congress for the background of the Federal Reserve. At that time there were already several treatises on the subject of questionable quality and it is quite likely that Mullins read them. Later he worked at the Library of Congress and approached the notorious Communist hunter Joseph McCarthy, to whom he also handed out material on the financing of Communism by Western banks. In 1952 his book about the Federal Reserve was published and in the following years he also published absurd articles praising Adolf Hitler, among others. Later he worked for the anti-Semitic newspaper Common Sense and similar publications such as those of Willis Carto.

Right at the beginning of “The Secrets of The Federal Reserve” Mullins boasts that his research at the Library of Congress was directed by the prominent academic George Stimpson, “co-founder” of the National Press Club. Mullins may have exaggerated the importance of Stimpson in this. The National Press Club had US presidents as guests, including Theodore Roosevelt, who was also associated with the American Defense Society, which had financed the publication of the “Protocols of Zion” in the USA. Chairman of the “American Defense Society” was a member of the secret organization Skull&Bones. The first US president to visit the National Press Club was William Howard Taft, also a member of Skull & Bones. Although it cannot be proven that Bones or a classic Anglo-American secret service had directly influenced Mullins in the work for his book, the Anglo-American empire had been circulating a lot of disinformation about conspiracies for a long time and thus indirectly influenced Mullins. No wonder that Mullins interpreted the Federal Reserve according to the fairy tales about the Jewish world conspiracy. The book was updated and reprinted several times over the next three decades, with occasional financial support from the ultra-conservative, extremely wealthy Texas oil baron Haroldson Lafayette Hunt, whose life served as inspiration for the TV show “Dallas” and the character J.R. Ewing. Hunt donated the “Facts Forum” for anti-communist radio and television programs, supported Senator Joseph McCarthy’s campaign, financed the right-wing Southern Baptist Convention, the Ku Klux Klan and the ultra-right John Birch Society. He was friends with the fascist Edwin Walker, with Franco-advisor General Charles Willoughby and with Texas oil billionaire Clint Murchison, who, according to historian Anthony Summers, financed George Lincoln Rockwell and his American Nazi Party, among others. Hunt also financed the Cuban Revolutionary Council, an organization of paramilitary Cuban exiles supported by the CIA and the American Mafia. In his book, Mullins examined a number of bankers involved in the creation of the Federal Reserve, and then claimed that even all the non-Jewish banks among them ultimately obeyed only the orders of the Rothschilds from England. And it was at this point that Mullins switched over to be a fairy tale teller.

Not only did he make up a tale of Rothschild world domination and declare all non-Jewish banks of concern to be unofficial Rothschild branches, but he also concealed from the reader the truth about how the Rothschilds had been built up by the British Empire 100 years earlier:

“What John Moody did not know or tell his readers was that the most powerful men in the United States were themselves accountable to another power, a foreign power, a power that had since its inception been relentlessly trying to expand its control over the young Republic of the United States. That power was the financial power of England, centred in the London branch of the House of Rothschild”.

Mullins did not provide any proof for his Rothschild thesis, but instead wrote outrageous nonsense such as that the British central bank “Bank of England was synonymous with the name of Baron Nathan Mayer Rothschild. Probably, Mullins had simply copied this misconception from older conspiracy books without fact checking. Nathan did not control the Bank of England, nor is the Waterloo myth true, according to which Nathan, with a little trickery, made so much profit on the stock market in one day that he achieved total financial dominance. So Mullins told the well-known, ridiculous story that the Rothschilds, just one generation after the days of Mayer Amschel in the wretched Frankfurt Jewish ghetto, took over the British Empire and the United States, while the non-Jewish elites just stared and did nothing. Not once does Mullins ask the question whether the Rothschilds could have been straw men for the British crown. The Crown had slowly and gradually turned the upstarts from the Frankfurt Jewish ghetto into influential bankers, and could destroy these upstarts again at any time. Using basic techniques of the intelligence world and organized crime groups, the Crown had in all likelihood ensured from the outset that the Rothschilds would be nothing more than straw men. Anything else would be contrary to the logic and reality of the British Empire. The connections between the Rothschilds and the American bank J.P. Morgan, quoted by Mullins from various books, are interesting, but in Mullins’ stubborn thinking, Jewish bankers can only ever be the absolute puppeteers, never simply puppets, partners or straw men. Harold Stanley, member of the management of the Morgan Guaranty Trust, had been a member of the Skull & Bones organisation since 1908. The non-Jewish Rockefellers were also deeply involved in J.P. Morgan. Mullins, of course, brings the infamous fake quote that somebody once attributed to Nathan Rothschild:

I don’t care what puppet is put on the throne of England to rule the empire where the sun never sets. The man who controls Britain’s money supply controls the British Empire, and I control the British money supply.

WHO Director Adhanom is a communist who works for rich people