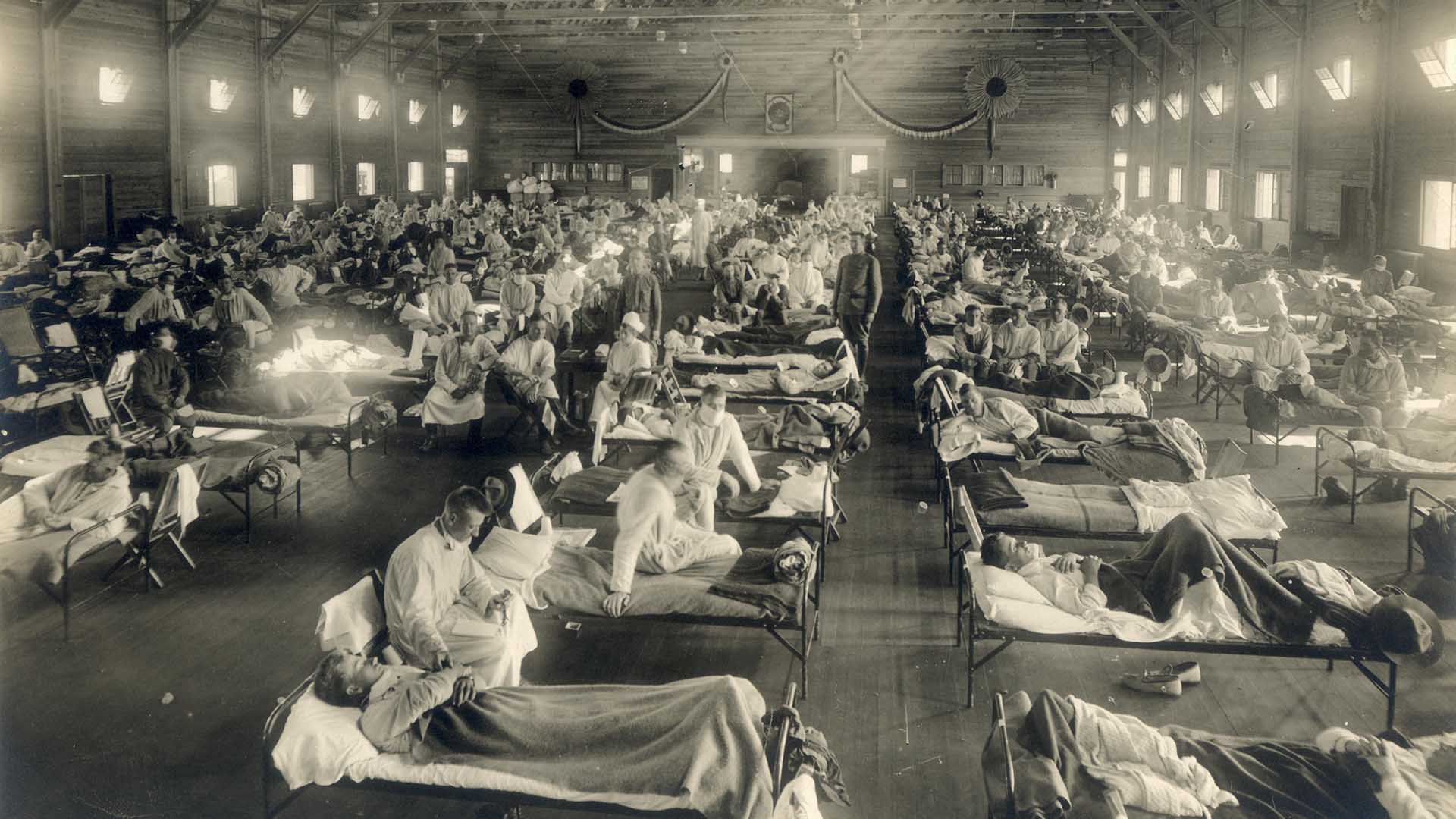 In the book “The Great Influenza” by John Barry you can learn vividly how the second wave of Spanish Flu devastated American cities about 100 years ago and how the US government ordered the newspapers to trivialize the situation with shameless lies.

The first wave still seemed manageable. The second was pure hell, because the virus had adapted better to humans through a mechanism called “passage” after literally passing through millions of people.

On October 10th 1918 a whopping 759 people died in Philadelphia. The city was used to 485 deaths per week (all causes included). The bodies piled up or were buried in mass graves. In more and more cities it was the same picture. In Camp Pike, Little Rock there were 8000 new patients in four days. The names of the dead were no longer published. In the city, the Arkansas Gazette newspaper reported

“Spanish influenza is just a regular flu – the old familiar fever and chills.”

Thousands and thousands of newspapers across the country carried the exact same talking point, that it was just ordinary flu.

Nowadays different groups are spreading the view that COVID is just a normal flu, a talking point that is copied endlessly. One could simply ignore the virus, stop testing, and one would not notice anything unusual, especially no excess mortality. We now have data on significant excess mortality and how the virus can attack the lungs more aggressively than many common pathogens. The COVID conspiracy theorists overvalue any study or single opinion, no matter how weak, that estimates the danger of the disease as low as possible and somehow fits the pre-cut talking point. Everything that does not fit the talking point is ignored or discarded.

The publishers were threatened by the US government during the Spanish flu epidemic: Print only “constructive” things, such as recommendations for preventive measures. The Los Angeles public health director said: There is no reason for alarm if ordinary protective measures are followed. Just wash your hands and that’s it. 48 hours later he panicked and closed down all public events and meeting places.

The COVID-truthers sound identical today with their assertions that washing one’s hands and keeping some distance would suffice, just like with the normal flu.

The Bronxville, New York, Review Press and The Reporter did not report anything for a long time about the Spanish Flu. Then they complained of alarmism. Fear was the bigger problem than the disease. The Illinois superintendent of public health wanted to propose in a confidential meeting to close down all companies temporarily. He was met with rigorous resistance. They said fear kills more people than the epidemic. Cook County Hospital had a death rate of about 40% from “influenza”. Literary Digest, one of the most widely read publications in the country, said: “Fear is the greatest enemy.” Many other newspapers ran the exact same mantra.

The COVID-Truthers today cry about “panic” and “fear mongering”. If someone takes the virus seriously and if standard measures are taken, they scream that this is just panicking. At the same time, the truthers spread panic about a supposed COVID dictatorship. They ignore the real COVID dictatorship in Russia.

Viral nonsense from the US government

Vicks Vapo Rub advertisements at the time said the disease was “just the old familiar flu, under a new name.” Mayors and governors have been quoted saying the exact same thing non-stop. The US government’s Public Health Service had ready-to-use printing plates made with identical propaganda and sent the plates to tens of thousands of newspapers. Millions of pamphlets and posters with that rubbish were also printed with Red Cross money. Health tips were gems of wisdom like “Be hygienic. Chew your food thoroughly.” People were always saying that the situation was under control.

Today, the COVID-truthers use social media and try to give the impression of many individual opinions. In reality they always deliver the same pre-cut talking points. They don’t even deserve the term “conspiracy theorists”, because they ignore the more plausible conspiracy hypotheses and instead made the weakest conspiracy hypothesis into their holy dogma.

COVID is supposed to be a hoax where a “normal flu under a new name” was exaggerated by “scaremongering” to implement a lockdown, which was not necessary because “ordinary preventive measures such as washing hands would be quite sufficient” and “fear is the bigger problem than the virus”.

The Journal of the American Medical Association knew better and rejected all the official, dangerous and negligent trivialisation propaganda. People could watch with their own eyes how their fellow human beings died in alarming numbers. The trivialisation campaign had rather the opposite effect on the audience.

I find it odd that you can write a piece on dogmatism (which I enjoyed) and follow it up with this.
The comparison to the Spanish Flu is a bit much. The Spanish Flu killed healthy adults in there prime. Currently in Canada 80% of the deaths have been in the population over the age of 80. 1 has been under 20. 9 under 30, 15 under 40 and 49 under the age of 50. Those numbers are roughly half of the number of flu deaths in Canada in 2018. In fact the flu is 28x more deadly by those numbers to those under 20 then covid 19.
The reason that the Spanish Flu media didn’t say wear a mask and hide in your house all day was that realistically they’re was nothing they could do.
Unfortunately, long term we are no different in 2020. We can’t simply hide forever. Food does not produce it’s self. Nor does electricity or shelter. It is a shame you find this a partisan issue. I find it a class issue. Being that the higher “work at home” class stays safe while the plebs toil in the trenches. It is of no matter to us whether we take this seriously or not. We will be exposed. And yes, most likely survive. Personally I’d like to enjoy a pint after work while I’m out there “risking my life” and wonder why that’s not something I’m entitled to.