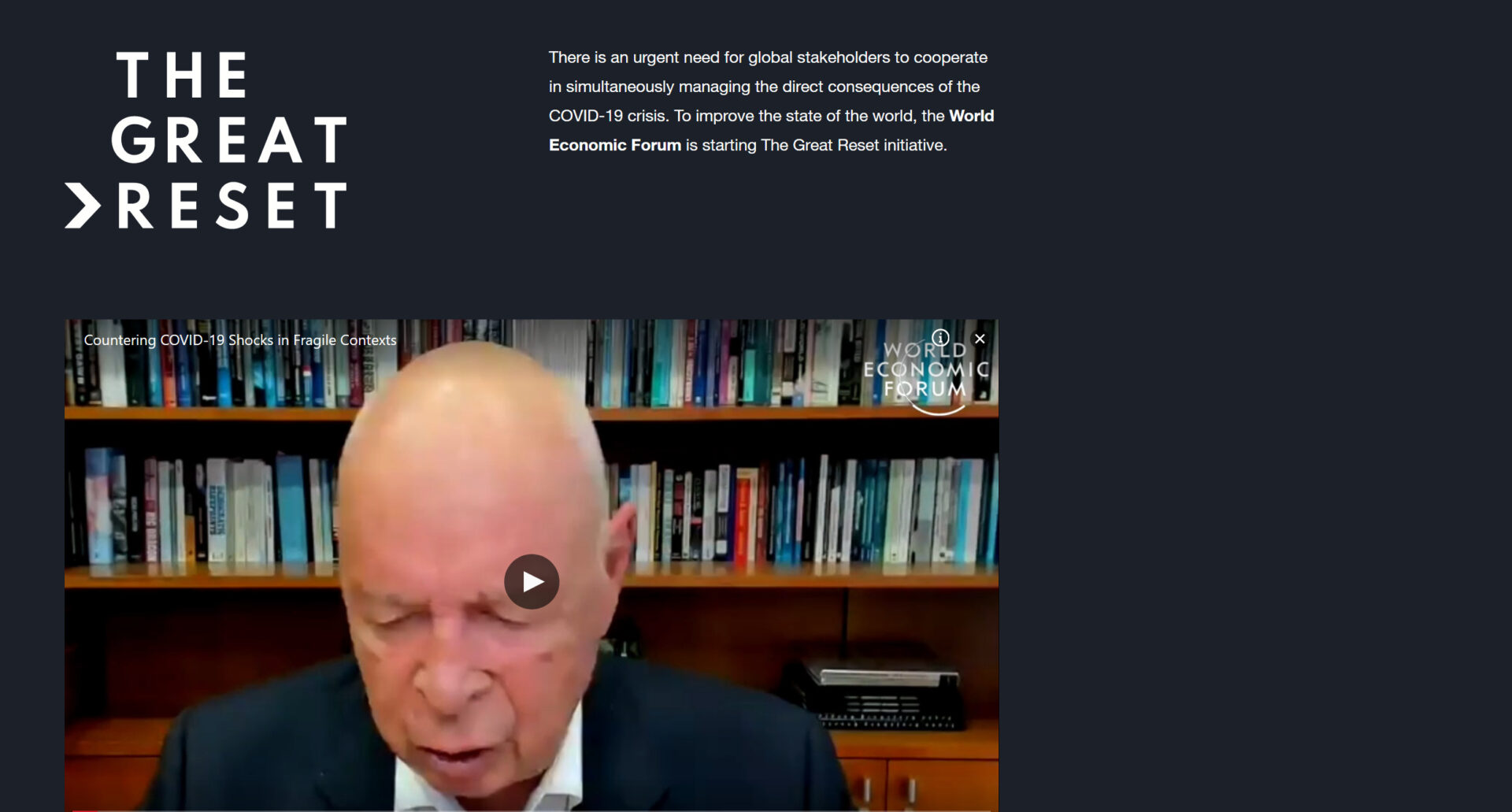 International mega-corporations under the umbrella of the World Economic Forum (WEF) want a “big reset” because of the Corona crisis and of course this arouses great mistrust.

First of all, the declared primary goal is to avoid any major business collapse. The WEF would have had to step in at any time even if a (unknown) attacker had carried out a biological attack with a virus or if major military confrontations had occurred. The companies concerned are systemically relevant and are thus integrated into the security strategy of NATO. It is not difficult to compare the participating corporations of the “Great Reset” with the membership lists of the Council on Foreign Relations (CFR), the Trilateral Commission and Bilderberg. But there are also giants from China and Russia, as well as corporations from the environment of Donald Trump.

“Founder and Executive Chairman of the WEF is the German Professor Klaus Schwab, knighted by Queen Elizabeth II. He also holds the high order of a Master of the Order of Saints Michael and George (KCMG). The Bilderberg Group, of which he was a member of the steering committee, also goes back to the British Guelph Empire, as do the CFR and other “Roundtable” groups and the Royal Institute of International Affairs.

In 2017, the WEF attracted a lot of attention in Davos, when for the first time a Head of State of the People’s Republic of China was present at the Alpine resort.

In April 2020, the WEF published an article postulating that the COVID 19 pandemic is linked to the destruction of nature. The number of newly emerging diseases is increasing, and this increase is associated with deforestation and loss of species. The argument is old: For several years now, people have been complaining that in Africa, for example, people are living ever closer to monkeys that carry dangerous hemorrhagic fever pathogens such as Ebola. In countries from North Africa to Asia, there are many host animals such as bats and dromedaries that carry novel coronaviruses (see COVID) or pathogens that cause severe lung diseases such as MERS. However, it is not possible to give greedy mega-corporations more control to protect people from new pandemics. Stupid coincidences can occur in Kazakhstan as well as in China. Whether in the wild or in the laboratory. And the WEF’s ecological agenda does not protect us against targeted attacks either.

It is also said that half of the global GDP is moderately or largely dependent on nature. The article concludes that recovery from the pandemic should be linked to nature’s recovery. So the old familiar green agenda we already know from the 1001 Club or the WWF.

The WEF proposed a plan for a green recovery. The plan provides for the promotion of the circular economy. The methods mentioned include green building, sustainable transport, ecological agriculture, urban open spaces, renewable energies and electric vehicles.

On the Great Reset website you will find the “partners”; mainly mega companies are meant. But also from China and Russia.

China’s Alibaba Group should now save the world from COVID and climate change? Anglo American with diamonds from DeBeers and various mining activities? BlackStone and BlackRock are of course also represented, they have connections to Donald Trump (through Mr. Schwatzman etc.)

Beijing Vanke is a Chinese real estate group. “China Southern Power Grid” certainly has little to do with real capitalism and environmental protection. Also China Energy Investment and China National Chemical Engineering Group would probably not have existed in this form without the long-standing support of China by western, Anglo-American aristocratic circles.

The Eurasian Resources Group (ERG) mines raw materials and is based in Luxembourg, but the boss is a Kazakh. Glencore also extracts raw materials. Jeffrey Epstein’s Offshore Structured Investment Vehicle (SIV), Liquid Funding, has the same attorney and director as several Glencore institutions. Glencore is partially owned by British financier Nathaniel Rothschild, whose father, Jacob Rothschild, sits on the advisory board of Genie Energy, which includes Michael Steinhardt and several alleged Epstein employees, including Bill Richardson and Larry Summers. In addition, Nathaniel Rothschild’s cousin by marriage, Lynn Forester de Rothschild, is a long-time associate of Jeffrey Epstein with significant connections to the New York “Roy Cohn Machinery” from whose environment Trump comes.

The Chinese Guangzhou Automobile Group builds cars. Not exactly very eco-friendly. Huawei is also a partner of the Great Reset.

LUKOIL is a vertically integrated Russian oil and gas company with the second largest proven oil reserves and the second largest production among the large international non-state oil companies. It holds 1% of the world’s oil reserves and 2% of the world’s oil production. It dominates the Russian energy sector with 16% of total Russian oil production and 16% of total Russian oil refining. Its main activities are the exploration and production of oil and gas, the production of petroleum products and petrochemicals and the marketing of these products.

Occidental is a world leader in oil and gas exploration and production and a major North American chemical producer. The company traces its roots to the Hammer family, which also had a large foothold in Russia, and is focused on expanding its major oil and gas facilities, which are focused on the United States, the Middle East and Latin America.

Superpowers are mainly concerned about biological attacks from smaller competitors