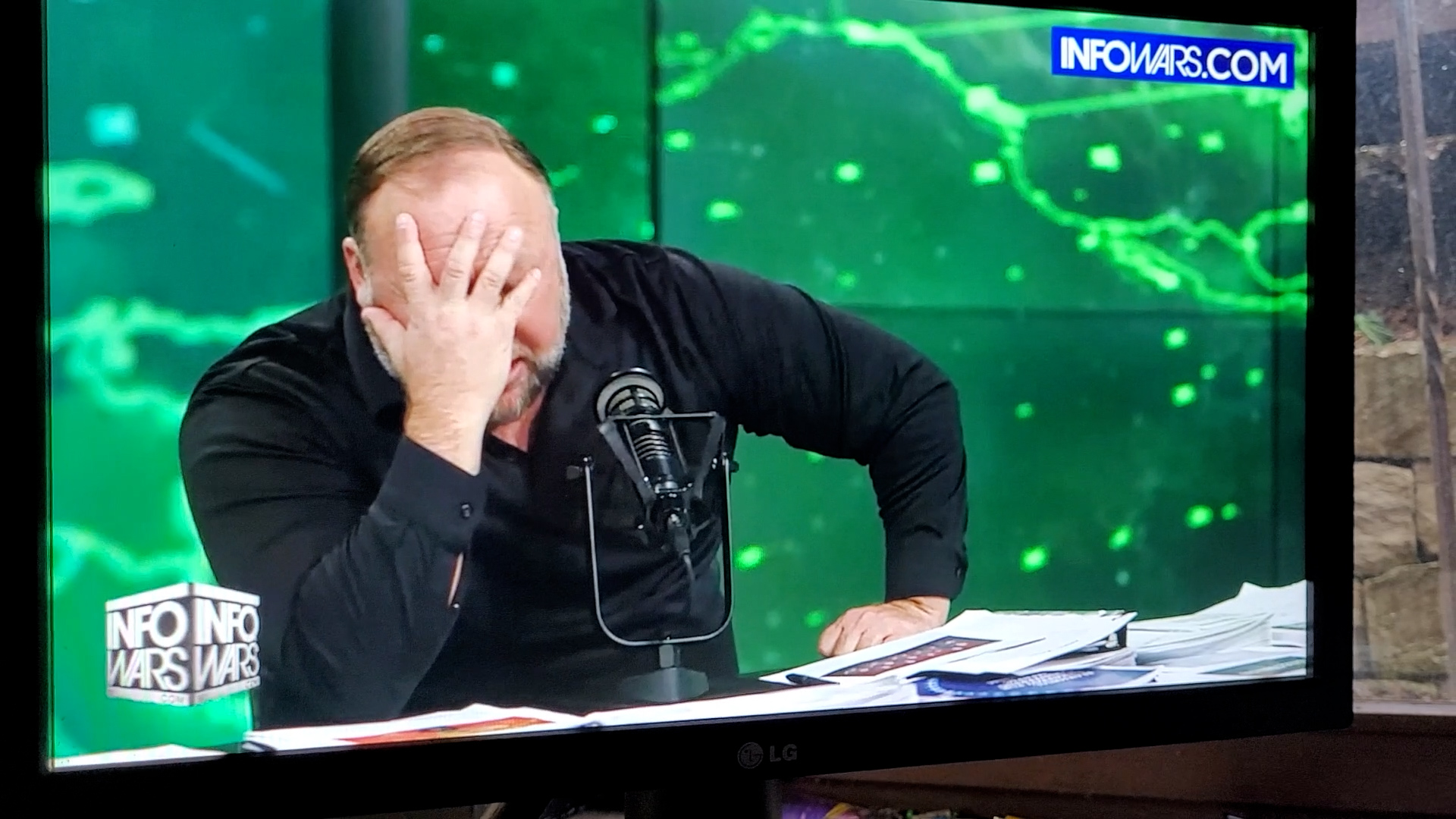 The Huffington Post published a database of how much Alex Jones’ Infowars store was selling per day over a span of 3 years. The silly Trump hype was a cash grab. Maybe the Sandy Hook reports were too. It becomes clear that traditional conspiracy media cannot afford to disappoint their audiences with reality.

After Donald Trump’s election victory in 2016, there was another winner: Alex Jones with his media platform INFOWARS was at the height of his popularity and, according to current press reports, he made around 165 million dollars in sales within three years.

He was able to monitor live on election day and afterwards how a flood of orders came in to the Infowars store. The harder he hyped the new president as a 4D-chess playing mastermind who plotted the saving of America for all his life, the harder he invoked Jesus and the holy ghost, the more his naive audience pelted him with money. This is what the “Truther” business is all about: Observing what the audience wants to hear and then delivering exactly that.

He’s nevertheless kind of broke; there is a risk of exorbitant compensation payments to the parents of Sandy Hook victims and the next expensive divorce looming after his current wife spent Christmas in the Travis County jail (for domestic violence) and her mugshot getting plastered all over the internet news. All the money that the supporters had invested in Infowars has evaporated and largely ended up on the bank accounts of greedy lawyers. His audience is no closer to getting meaningful change as it was 10 or 15 years ago. Countless copycats have tried to copy his business model since then, which made it increasingly difficult to stand out from the crowd of content producers and not be sued. He halfway went along with the QAnon scam and halfway scolded his competitors who raked in money for fluff based on an anonymous internet account called Q. He also presented his own brand of revolution fantasy with guests like General Flynn and Steve Pieczenik. Unfortunately we don’t get to see how many products he sold on those days he was harking this hope porn. Maybe we will find out soon as Jones was subpoenad for documentation an giving a statement about the storming of the capitol.

He has never been as successful as an embarrassing cheerleader for Trump and the Republican Party: From September 2015 to the end of 2018, he had a turnover of 165 million US dollars. He was paid royally for spreading unrealistic fantasies. And the more money he earnedand thus became more visible, the greater was the illusion that he could make a difference.

The records, first received from HuffPost, give the clearest picture yet of the financial health of the Infowars website and of Jones himself.

The parents of SandyHook victims were repeatedly referred to as fake actors on Jones‘ broadcast, and there were some cases of stalking and cyberstalking, prompting Jones, along with other media characters, to get sued. Courts ordered Jones to disclose his balance sheets to see whether he did it all for the money.

Jones was found guilty by default by a court before the trial even began because Jones was playing for time and produced too little information. Now you can see in the documents how on the days of reports about “fake actors” at Sandy Hook the Infowars online shop achieved record sales. Apparently the subject was a real cash cow. Internally, Infowars editors like Paul Joseph Watson became concerned about Sandy Hook coverage. Why, it was said in internal emails that became known in the course of the judicial investigations, would this long-gone topic be covered at all? Why did we get involved with people who were “completely crazy”? And why were we so aggressive when we could harm parents with it?

If Jones made the reports for financial reasons, and he didn’t care about the truth or deliberately tell lies, then he is guilty of defamation and has no chance of appeals. Multiple payments of damages would drive Jones into bankruptcy.

On days with Sandy Hook reports, the Infowars store made between $ 100,000 and $ 200,000 in revenue. Some days sales were only $ 30 or a few hundred. The suspicion is that during phases of bogging sales the boss thought of making another Sandy Hook video to boost sales. The whole company stands or falls with political trends and now any amateur influencer can produce content and go viral. So the competitive pressure is enormous and Jones had to finance up to 70 employees and the expensive lawyers in his custody battle with his first wife.

“We beg quite a lot because we can barely pay the bills,” Jones told a caller Thursday during a section of his radio show promoting the Infowars store.

Since the beginning of the pandemic, Jones has called the pandemic a gigantic fake, and vaccinations in particular are paintd as a murderous conspiracy. The question is whether the overweight Jones is secretly vaccinated himself.

How many older, overweight people among the Infowars audience avoided vaccinations and therefore died or needed treatment? It was not just with Sandy Hook that Jones crossed the line and sonded like statements of fact disguised as expressions of opinion. What if 100 people sue him for his corona reporting? What if drug companies are next to sue Jones and other influencers? He also received a subpoena from the Committee of Inquiry into the January 6th Capitol Storm. His employee Roger Stone had already been sentenced to imprisonment for false testimony under oath in another case. Both Jones and Stone had dealings with the organizations “Oath Keepers” and “Proud Boys” whose members received the toughest charges because of the Capitol storm and the planning beforehand.

Jones ‘second wife spent Christmas in Travis County Jail. He had called the police about domestic violence and they promptly picked up the drunk woman. Afterwards, he said that her psycho-medication was not properly adjusted. It’s a conspiracy of the pharmaceutical industry.

ALEX JONES WAS A RAPIST HIS TEENAGER YEARS !!!!

ALEX JONES WAS A RAPIST IN HIS TEENAGER YEARS !!!!