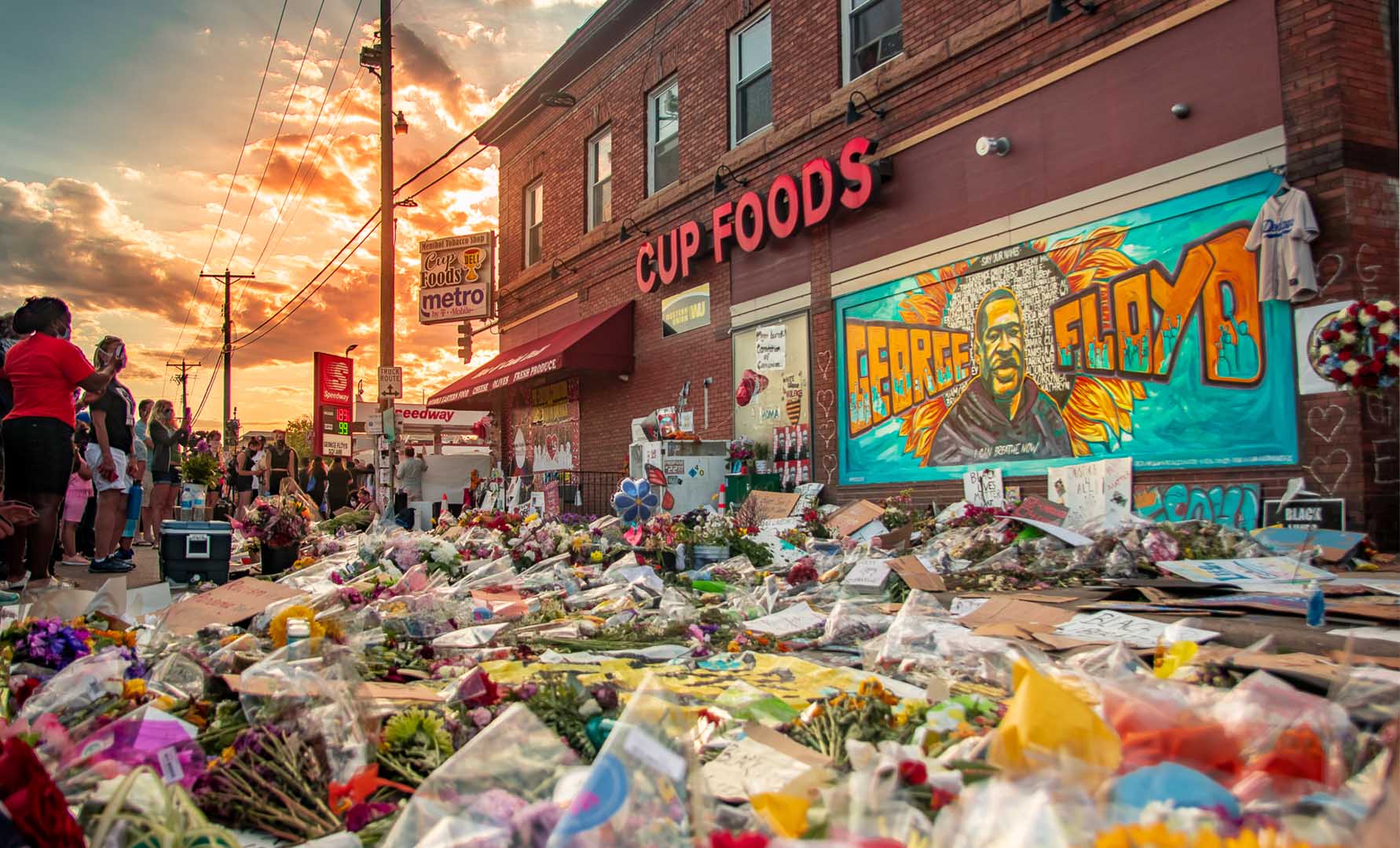 Floyd was in bad physical and mental condition as well as mortally afraid of police, yet he chose to be in public on multiple drugs and may have paid with counterfeit money. Once the police encounter started, he added more dangerous mistakes and apparently suffered a heart attack long before he was on the ground in a neck hold. The police added their own mistake: Overestimating his physical health and maintaining the neck hold instead of realizing the seriousness of the situation and performing CPR.

The “Black Lives Matter” activists insisted from the very beginning that Floyd George had followed the instructions of the police at all times. This is not true at all.

An officer approaches from behind in the blind spot on the driver’s side because he has to back off if necessary. Policemen know that an armed driver from the driver’s seat has a bad shooting position, while the policeman is supposed to move at the best possible angle. The officer knocks against the window with his flashlight. The first reaction of a citizen should be to keep his hands well visible at the wheel. Do not get out of the car unless you are told to.

The officer says, “Let me see your hands.” It had already been radioed that the suspect was probably under the influence of drugs and alcohol and possibly paid with counterfeit money. In any such check, the suspect must have his hands be clearly visible. The suspect may be high on meth, may have drugs and weapons hidden in the car and, in an emergency, may try to shoot his way out and escape.

Floyd opens the door and moves around the vehicle instead of calmly showing both his hands on the steering wheel. He just says “Sorry, sorry,” without showing his right hand. This alone is a refusal to comply with a police order. For the policeman, there is a danger that Floyd will reach for a firearm in the car with his right hand. The policeman says “Stay in the car! Show your other hand!” Again, Floyd does not follow the instruction. The policeman repeats that he wants to see the other hand. At this point, the policeman draws his service weapon and repeats the request again, which Floyd again ignores. Floyd simply asks “What did I do?” He apparently does not even know the absolute basics of how an encounter with the police works. A policeman gives instructions which have to be followed, without any ifs and buts, so that he can determine the identity of the suspect, decide if he can hold the suspect and if necessary arrest him next. Floyd must reveal his identity. Otherwise he may remain silent. What he is not allowed to do is to disobey orders and start arguing around.

Floyd refuses to put his right hand on the wheel one more time and becomes visibly angry. Only then does he follow instructions. He tells us that he has already been shot in this way by the police once before. Next thing you know, he starts crying and gets hysterical. Supposedly, he’s afraid of being shot. The officer has to repeat several times the request for Floyd to leave the vehicle. Again he doesn’t follow, but creates a dramatic scene. The officer pulls him out of the car, which is normal procedure.

You see a scuffle and Floyd is handcuffed. The cop says, “Stop resisting.” He orders two more people to stand against the wall and drop a bag that could theoretically contain drugs or weapons. The policeman says clearly that he is only investigating what is going on, meaning establishing identity and performing a simple questioning. It is common for people who are being held to become very emotional and want to generate sympathy. Floyd seems completely unhinged, is possibly under the influence of drugs, is almost two metres tall and weighs almost 200 pounds. A second officer moves him.

He is taken to an police vehicle, while he continues to act dramatically. The police officers cannot know that he has heart damage (possibly because of his past in the cocaine business), possibly has a panic attack, heart palpitations and is approaching a heart attack. Floyd cries as if he is being dragged to the slaughterhouse, although it is all about identity verification and simple interrogation. The autopsy showed drugs were detectable in his system. He may have faced a number of criminal charges and he had a criminal record.

Floyd again fails to follow instructions. They tell him to stay on his feet. He claims he is claustrophobic, which is of course answered by the officer with “You’ll get in the car anyway”. Cops have already heard every excuse and regard arguing as a refusal and resistance against the state authority.

If Floyd had just gotten in the freaking patrol car at this point, he would still be alive. Instead, he yells at the officers that he is “not one of those guys”, meaning a criminal. But his rap sheet, including armed robbery, shows that he is exactly “one of those guys”.

His face looks completely crazy and he stiffens up to avoid being forced into the car. The officers offer to open the car windows for him. He still refuses. An officer tries to pull him into the car from the other side. He goes crazy more and more and says for the first time that he can no longer breathe, an indication that he is already having a heart attack at this point, long before he is on the ground.

The officers had better ways to get him under control than the dangerous neck/knee restraint and they definitely should have checked his pulse. The officers probably mistakenly assumed that he was a strong man under the influence of drugs and in the worst case will only lose consciousness. Because of these mistakes the officers will get some kind of punishment in court, but it is practically impossible to prove Derek Chauvin and the others committed premeditated murder.

The next bodycam video shows that the other occupants of the vehicle are relatively calm, answering questions and following instructions. Floyd’s behavior is annoying to the police simply because they “try to get out of traffic on the street to avoid being run over by a car”.

Floyd reveals his name and date of birth. He is told that someone in the store accused him of paying with counterfeit money. He is told that he was pulled out of the car because he did not follow the instructions.

Next, they tell him they’re gonna place him in the back seat of a squad car. He is asked if he is under the influence of drugs. An arrest is practically guaranteed for this purpose, mainly on suspicion of drug use and failure to follow instructions and phony money. The allegations of counterfeit money play only a minor role at this point. If this had started as a traffic stop it would have played the same way.

Floyd absolutely does not want to get into the patrol car, whereupon one of the policemen annoyedly shouts out to him that he will be forced because he “does not listen to anything he is told”. It is the definition of resisting arrest. If he had behaved correctly and declared that he needed an ambulance, they would have called one.

Someone, possibly a passer-by, yells something about a “heart attack” because of Floyd’s shouting, and this is quite prophetic. Floyd does not kick or punch the officers, yet still he resists. Floyd repeats that he cannot breathe, which is typical of a heart attack. Floyd repeats “Mama, Mama, Mama…” which in the transcript without context was interpreted by many as him as the harmless victim and the policemen as heartless monsters. But the bodycam videos show someone going berserk and under the influence of drugs. The police simply thought he was a junkie who wanted to put on as much drama as possible to avoid arrest. Every police officer in troubled neighborhoods has experience arresting suspects on PCP or meth or alcohol, often with far more violent arrests.

If Floyd hadn’t died, the footage would look just like anything you see on cop shows on TV such as toughest takedowns or Live PD.

What additionally causes Floyd a problem is that he whines loudly and constantly that he cannot breathe, which seems paradoxical. People who have a heart attack have the feeling that an elephant is sitting on their chest. The officials simply think he is a drama queen and only puts on an act encouraged by drug influence. The police thinks he is calming down, yet he is dying.

Bystanders start shouting that you should feel his pulse. One of the officers does just that. But there are no consequences.

A brutally honest analysis of the lawsuits against Alex Jones